H-AIR is a residency program for people involved in the animation industry.
The purpose of the program is to invite animation artists to stay in Hiroshima City for a long period of time and engage in their new projects here.
The aim is to help the invitees to build their careers and enrich the art and culture environment in Hiroshima.

Anyone regardless of age or industry working on a new, unpublished project related to animation is eligible.Projects other than animation, such as novels, comics, and films, are also eligible to apply, as long as they are intended to be adapted as animation in the future. Applicants may apply not only for the development or production of their work, but also for the purpose of research or study for the production of their new and unpublished projects.

2 Period and Contents of Support

H-AIR will invite animation professionals from around the world to Hiroshima during the following period (Japanese applicants are also eligible).

The period may be subject to change due to social or environmental conditions.

Number of artists: 3 (planned)
The invited artists will engage in the following activities.

Working on their new projects

Interaction with the residents of Hiroshima City and the area where they will be staying, as well as with people involved in art and culture.

In addition, the following activities should be carried out during the stay

For other details, please read the terms and conditions in "4 Application Procedure and Schedule".

Participants will stay and work in one of the following areas in Hiroshima City.

Along with the place of stay, we will provide these incidental facilities: furniture and internet necessary for daily life.

February 14 Update: We closed the applications on Feb 14th.

Applications will be accepted from January 7 to 31, 2022 via the following application form.

January 31 update: considering the impact of the recent global spread of coronavirus infections, we have decided to open a second application period.

March 25 Update: The following three artists have been selected as H-AIR invitees, who will stay in Hiroshima City for six months from May 1, 2022 to engage in production and exchange activities. (The period of stay is subject to change depending on social conditions and other factors.) 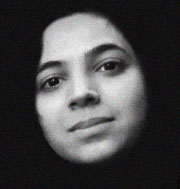 Mahboobeh Kalaee (1992, Iran) graduated from the Tehran College of Fine Arts with a BA in Industrial Design (2015). A MA Animation Directing at Tehran University of Art (Faculty of Cinema & Theatre) (2020). She is a 2D animator, author, illustrator, graphic designer, and director of experimental and short animations.
Her first professional film's success motivated her to devote herself full-time to her special mix media technique, as well as to study the form and narrative structure of experimental films. Her favorite forms are studies on real-world images as an animation material that led to essays films and creative animated documentaries. Her goal is to create a world which stands in the blurry line between the real and the imaginary.

Ship for Our Relation

A group of Iranian miniature characters traveling to Japan to discover new edge of Calligraphy. Although they date back hundreds of years, they are in the form of a collection of illustrations from a book that are traveling in the present age. The film is an animated documentary about the journey of an Iranian miniature book and the connections that their characters make with the real world trough mixed media technique. The connection between Persian and Japanese words as an material for focusing to study form and meaning of the words and how can improve their storytelling potential with animate. 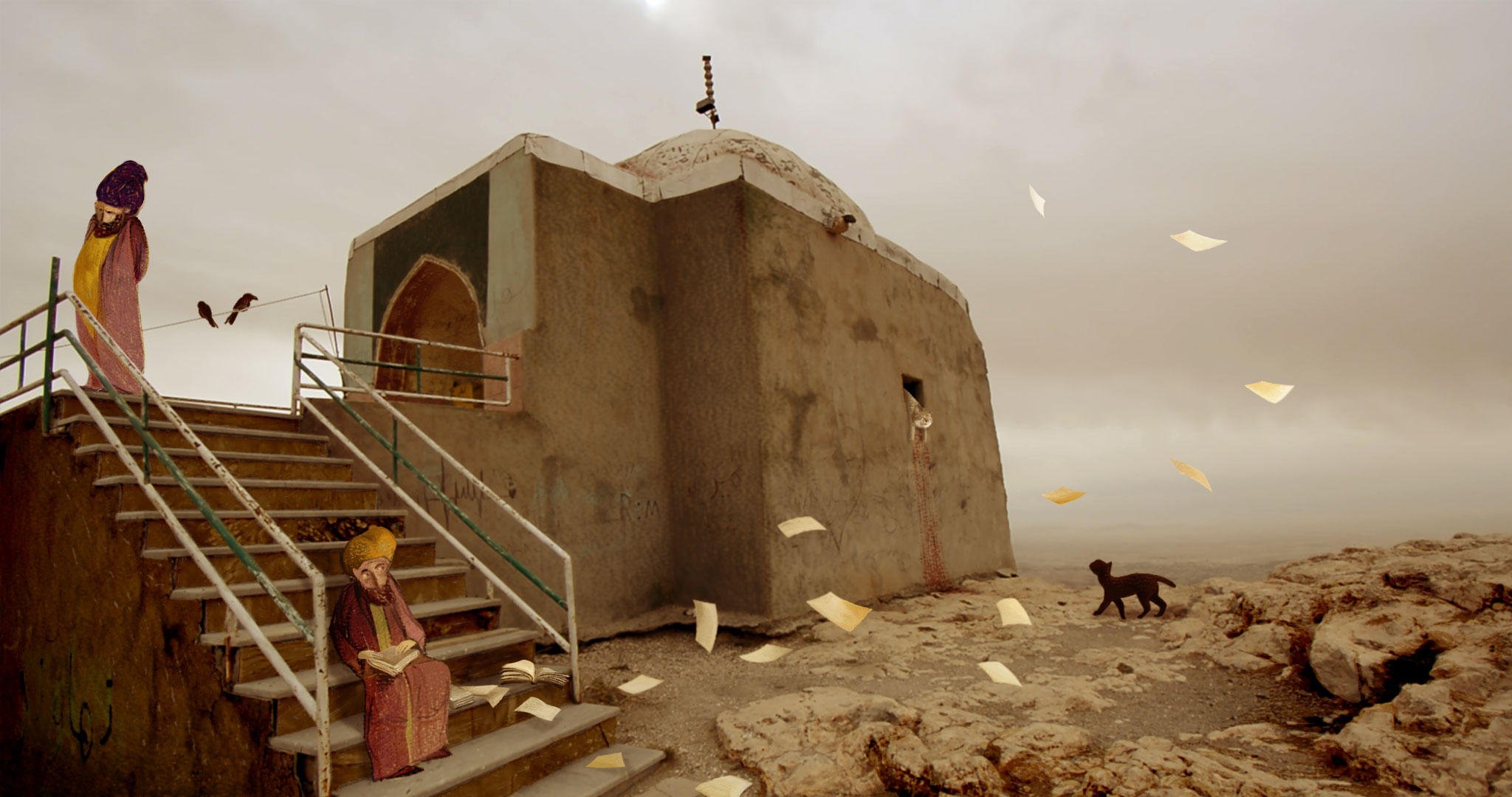 O people of the land of the sun, in HIROSHIMA! Your words are the most hospitable language in the world! My fascination with your mysterious culture and unique aesthetics leads me to you. Being in your space and discovering the new point of views in observing the world was one of my dreams. Having direct contact with your culture and civilization will be very exciting for me, and I will describe my experience in my film. I'm sure the lovely Hiroshima is full of new ideas for any filmmaker. 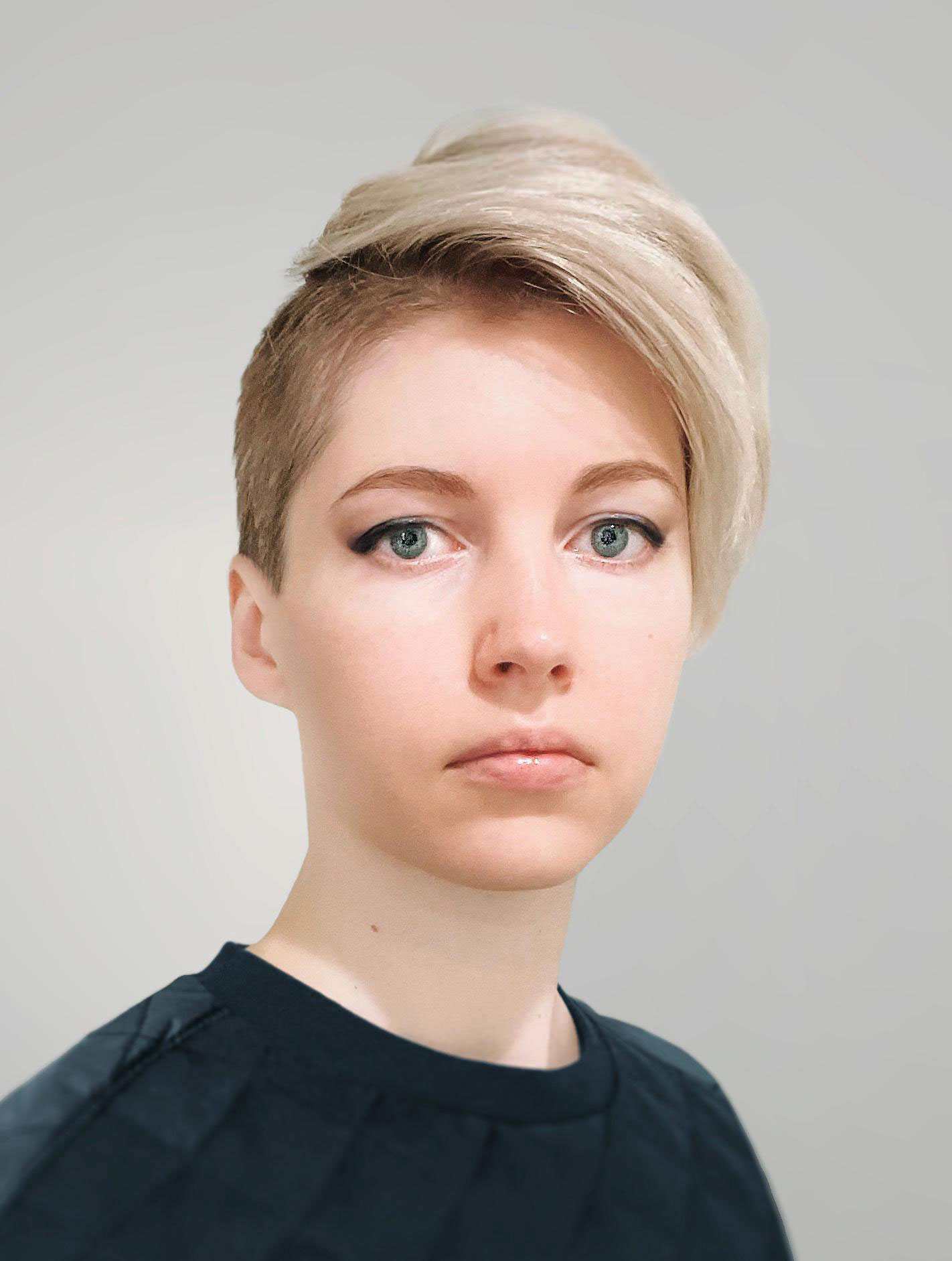 Nata Metlukh was born in 1982 in Ukraine. She studied classical animation at Vancouver Film School, and received the Master of Arts degree at Estonian Academy of Arts, where she studied film direction under the Priit Parn supervision.
Now she is based in San Francisco, working on commercial and personal projects, focusing on making gifs and animated short films. She creates visually bold, character driven works in a digitally hand-drawn technique. Her stories are based on absurdity and defamiliarization of common things. Nata’s films have been recognized by major animation festivals and received a number of awards.

“Off-Time” will be an animated short film featuring time in different aspects.
The goal is to explore time-related themes such as: urban rush in the big city, the urge to be productive all the time, different time perceptions, speeding up time when we get older, etc.
Urban life will be shown in various time states: when all the actions are going in slow-motion, when the time reverses and everything is running backwards, when the time is frozen, or flying by too fast. 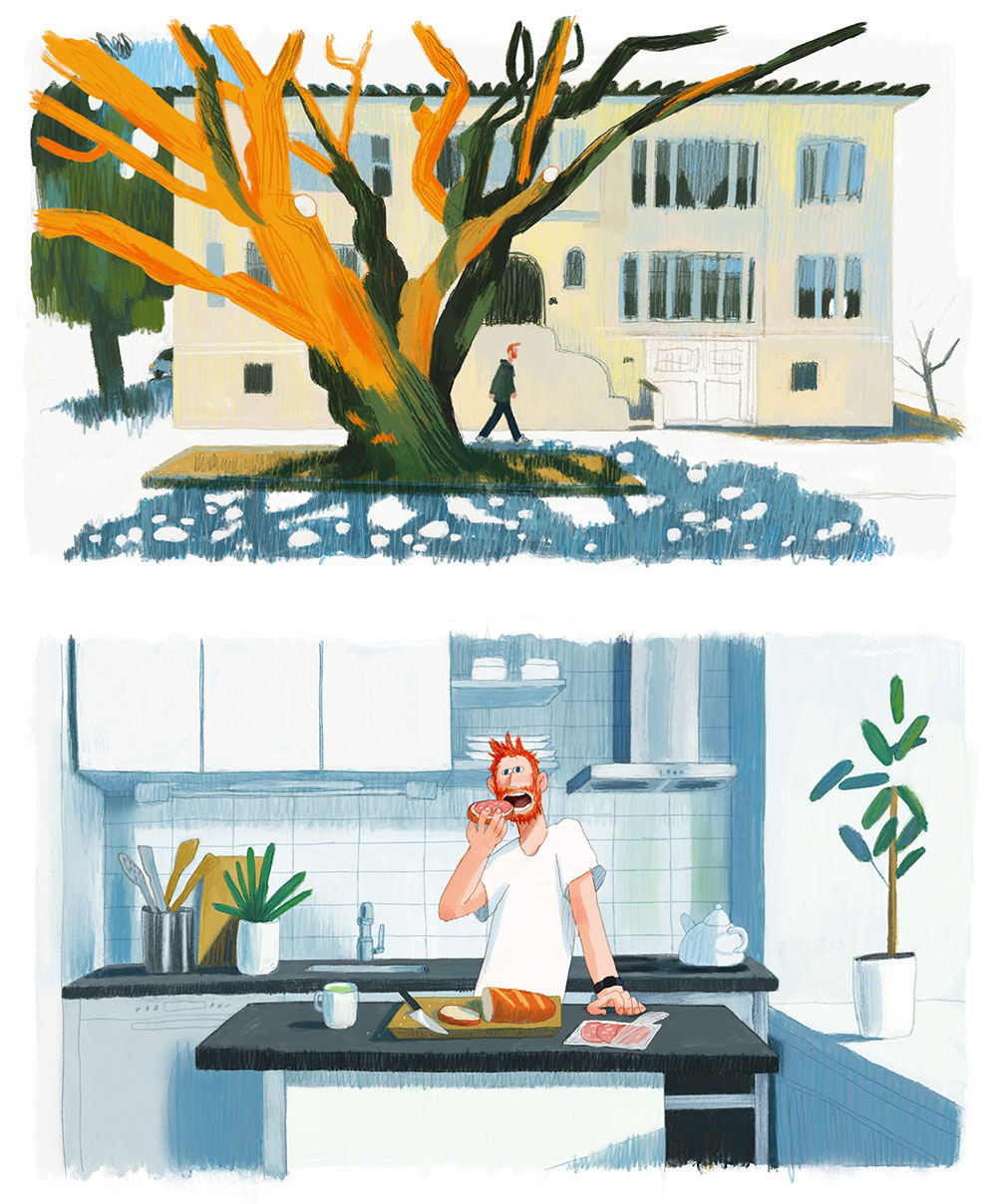 Hiroshima is a City of Peace and in these tough times it’s a beacon of hope that peace will eventually come to all the ravaged lands. I hope to have a fruitful time during my residency, and will try my best to contribute my skills and knowledge to everyone who are interested in animation and fine arts. I’m excited and grateful for the opportunity to live and work in Hiroshima City, and to be able to immerse myself into the local culture. This invaluable experience will spark new ideas for the future works and will be a great promotion for the independent animation filmmaking. 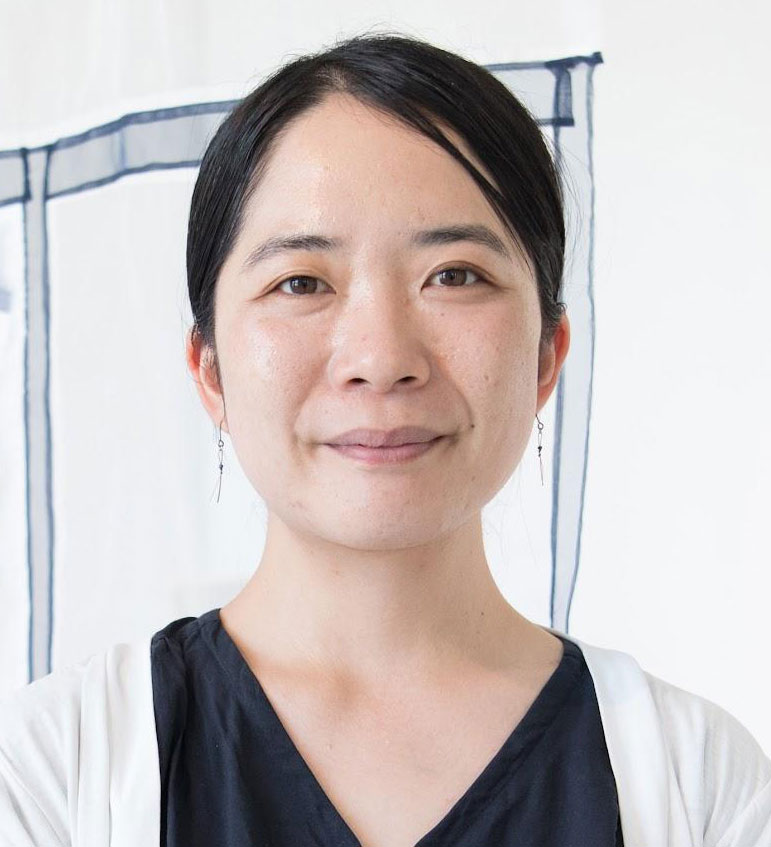 Born in 1986, Ondo-cho, Kure city, Hiroshima
2010 University of Alaska Fairbanks Bachelor of Fine Arts, Art: Painting, U.S.A.
2017 M.F.A., Tohoku University of Art & Design. She has been inquiring about whaling, fishing, and the folk culture of the sea in Japan and abroad, and has published her findings in the form of little presses, embroidery, and sculptural works. Presides over the little press "Ordinary Whale". Recent exhibitions include "20th Anniversary Exhibition: Restoration of Narratives" (Sendai Mediatheque, 2021) and "VOCA Exhibition 2022" (The Ueno Royal Museum, Tokyo).

I was born and raised in the Seto Inland Sea, and was inspired by my original landscape of "landscapes moved by water" to create an animation/video work that mixes animation and real landscapes. First, as fieldwork, I will observe and record the "moving scenery" that I can see from the boat on various large and small voyages to and from Hiroshima City, and also observe and record the "moving objects" in the sea by diving into the sea at bathing beaches in the suburbs of Hiroshima City. We will also interview people who use boats as a means of livelihood, and conduct research on the past of ports, rivers, gantries, etc. in Hiroshima City and on the islands. We will also incorporate ideas from the fieldwork in the creation of our work. We will use animation techniques such as zoetrope, para-para manga, and stop-motion animation of fabric works to create a three-dimensional work with animation elements, like a portable device. The moving animation of the device will be set up in the city, 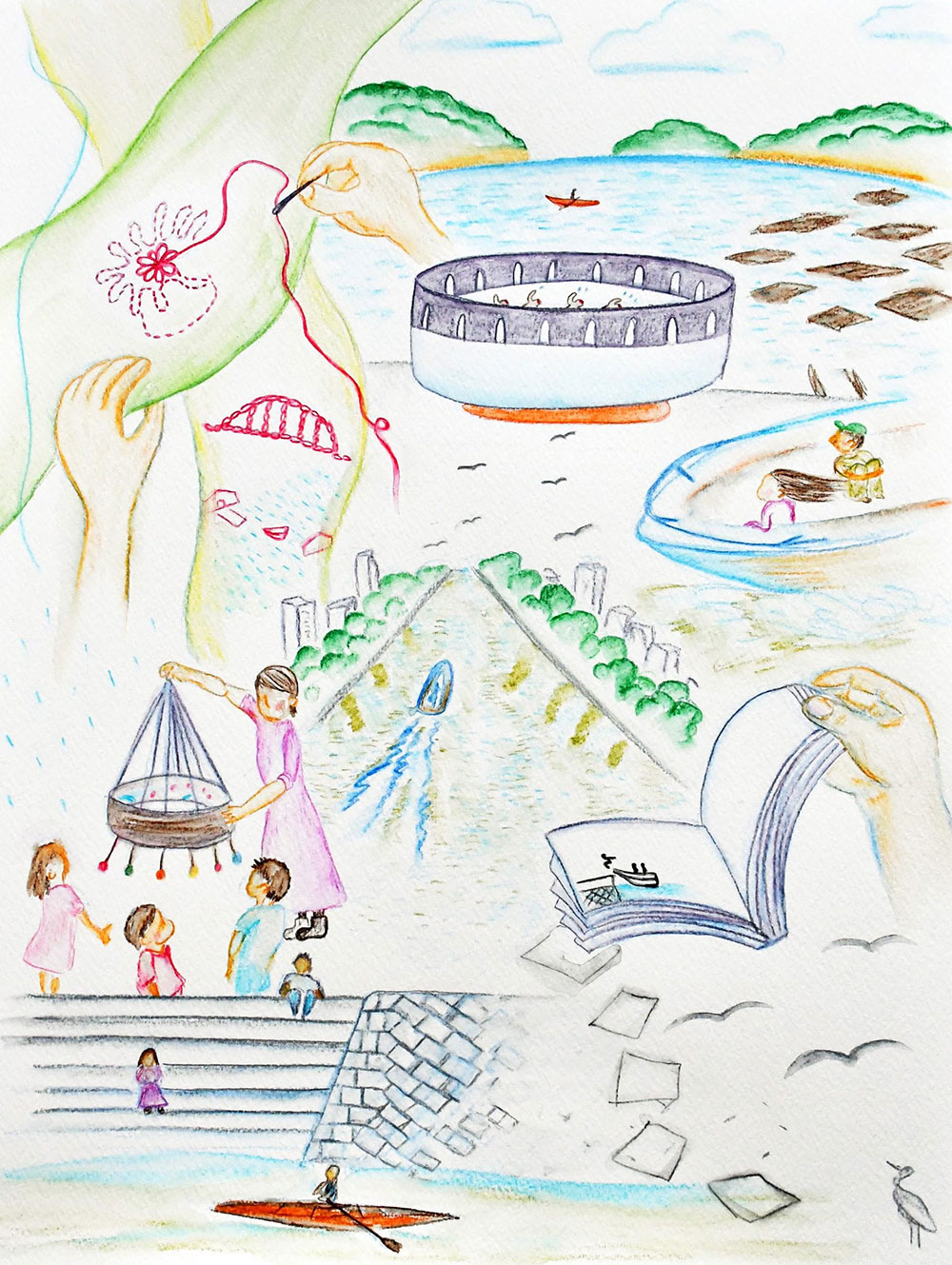 For many years now, I have been living away from my hometown in the Seto Inland Sea. The more I visit different places and the more time passes, the more I think about the beauty and specialness of the sea of Hiroshima. I am very much looking forward to being able to work with everyone and create art while reconnecting with Hiroshima, which is my original landscape.